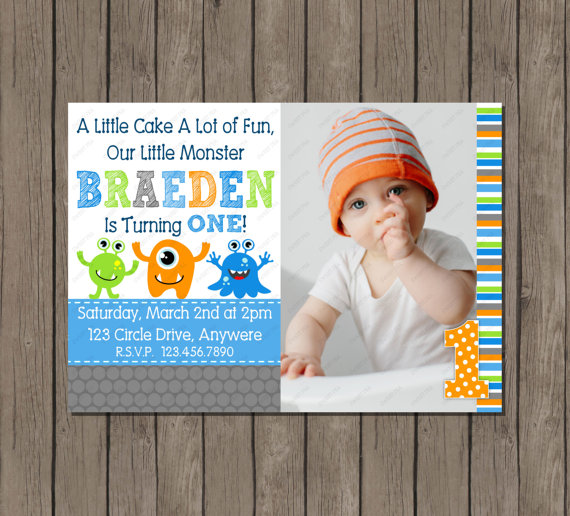 A year already! Man how time flies…seriously, it’ll hit you pretty hard cuz you won’t barely see it coming.  Before you know it your little baby turns into a little boy.

For J’s birthday I chose a Monster Theme. Seemed appropriate for a little one who is constantly tearing into everything and going-going all the time!

I found the invitations on Etsy for only $8! Awesome price for a super cute custom invite, then just print it yourself 🙂

I found candy googly-eyes in the cake stuff isle at the grocery store – perfect addition to a simple cupcake and some butter cream frosting.  For the cake and cupcakes I used box cake but made a few substitutions to make it a little less box-cake-y.  Use milk instead of water, add an extra egg, add a 1tsp of vanilla, and use butter in place of the oil.  Super easy substitution and I thought it make the cake a little lighter and tastier than usual too.  For the cake I baked 2 – 9″ rounds then stacked them and cut it into a googly shape.  Then I used a piping bag and a grass/hair tip to get the stringy texture for the frosting.  It wasn’t the quickest process, but looked pretty good for being a novice cake decorator.  I used doughnut holes for the eyes, and found a cute #1 candle to add.

The cake smash didn’t go quite like it’s “supposed” to though.  J wasn’t very interested in eating the frosting or the cake…

We though that as soon as he tried some of the frosting he’d be hooked and get the idea….

Guess we were wrong…

We tried moving him out of the highchair to see if that would help any…I think even T had better luck with the cake smash then J did!

Then daddy stepped up and showed him how’s it done

Opened some pretty awesome additions to J’s toy collection too!

But I think the part he liked the BEST was playing in the MUD!  What a silly messy boy!

This Little Monster is gonna be a BIG BROTHER!

One thought on “This Little Monster Turned 1”