As J approaches a year old, I have been asked by many people when I plan to wean him from breastfeeding.  I’ve also asked myself this question.  When I was pregnant I knew that I would breastfeed for at least a year, but haven’t given it much thought after that original decision.

I wholeheartedly agree with and believe the vast benefits that breastfeeding has for infants.  J has never had any illness other than a slightly runny nose, never had an ear infection or any other health issues and I am sure this is in large part due to breastfeeding.  I know that breastfeeding for some mama’s is extremely challenging either by lack of time or milk production levels, and I feel very blessed that I have not had to endure this struggle for the last 10+ months.  Which is part of my hesitancy to decide when to wean J.

I don’t feel like I “need” or “have” to wean him.  But I also realize that with planning to expand our family soon, I’m not sure how the logistics will work if I were to continue to breastfeed J while pregnant or beyond.  It wasn’t until recently that I was educated on the fact that some mama’s can continue to breastfeed both their young children along with their infants in what they call “tandem breastfeeding”.  I had no idea that was even a possibility.  But I’m also not sure that I could do that or would want to do that with my kiddos.  Partly because when your little one is really little, for the first 3-4 months, I felt like all I did was breastfeed.  My boob was out of my shirt and attached to J more often than not during those first few months.  A blessing, yes…but extremely exhausting at the same time.  The idea of feeding two kiddos simultaneously is kind of nerve wrecking for me.

With cows milk being introduced at around a year old, I feel like maybe that will aid in the weaning process too.  Although I know there are plenty of ideas and opinions out there about the ill effects of cows milk on infants too…so I’m not using this as my only reasoning behind deciding to wean or not to wean.

So when then?  At this point I plan to just see what happens.  Maybe J will decide that he’s not that interested anymore….although I don’t see any sign of that yet.  And until he starts sleeping through the night I doubt that this will happen on his own accord.  Or maybe when baby #2 is on the way and I’m too big around to nurse J comfortably that’ll be when I really push the weaning.  Although I haven’t the slightest idea of how to go about that either.

Until then I’ll take full advantage of the snuggle time I have with my little guy, as we all know those days get fewer and further between as the grow into big boys 🙂 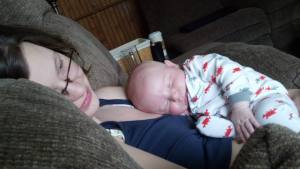